Every year, the Foundation holds a competition with architecture, engineering, design and art schools on various topics relating to the environment and innovation.

These competitions illustrate the Foundation’s commitment to researching future challenges: from a lifestyle respecting the marine environment to alternative housing and energy savings.

This year’s competition focused on the conception and design of a modular monohull sailboat.

Space modularity is fundamental in today’s design, so attention was focused on the design of a scenario allowing for at least 2 possible boat configurations. Modularity could be addressed from different perspectives, being short-time and linked to the activities on the boat and/or long-time and linked to the boat’s life. This concept of modularity had to take into account the interior and exterior fittings of the boats.

The Fuboat concept is inspired by the fundamental principles of traditional Japanese houses and their modularity of space. In addition, the rigging’s load-bearing structure allows the interior space to be freed from a through mast, creating a modular living space. The jury particularly appreciated the bold and elegant design of this project.

By choosing to temporalize the spaces rather than fragment them, the concept of the Optimus 36 proposes to restore volume to the interior by subdividing the hull into three modular parts. It is thus possible to divide the layout of the yacht into five configurations. The jury wanted to reward here the quality of the concept as well as the technical response provided.

The Flower Power has an extension that unfolds to offer 3 positions. More than a simple tender on the water, it replaces the bimini when on board and can also be used as a stern platform. This dual use of the dinghy was particularly appreciated by the jury.

2019 competition: the campsite and its environment

This year was dedicated to the camping market.

The european students have to imagine suitable solutions in order to fit the camping installations with its location. They have worked based on the following specifications : an existing (or not) camping of 35 000 square meters, with 90 boxes and common facilities (welcome area, restaurants, restrooms and swimming pool).

Located among a little village in France (St Gervais- sous Meymont- valley of la Dore), this camping is a successful integration allowing a new beginning to the 240 inhabitants village. The jury has underlined the new mutation of existing installations : railways, stations or la Dore valley.

Heterotopie is a philosophical concept for Utopia area and Lucas chooses Port Saint Louis du Rhône as an example of an existing camping, today abandoned. He has studied the areas, the installations according to the climate changes. So, Lucas proposes us an architecture with different levels of water risks.

This project is based on an old collective inhabitations for industrial workers named «familistère » built by M Godin in north of France. This organization included meeting rooms for the workers. This team has recreated the same state of spirit with a link between tourists and local population and with accomodations suitable for each season.

2018 competition : conception and design for a power catamaran

In 2018, the jury has rewarded 3 projects and one special prize.

The competition was about conception and design for a power catamaran. While taking into account the evolution and development of boating and technological advances, students have succeeded a creative challenge to design a power catamaran which is innovative in its design.

The project named Le Nouvel Horizon is a high level catamaran which combines space, performance and ecology. This boat can sail at 20 knots. Its modular conception can add 40% place when the boat is at anchor. Its hybride motor and photovoltaic installation save energy.

The jury has appreciated this catamaran able to seduce various users between innovation and confort.

The Dyseis has been designed in order to live among the water et not only upon. Thanks to platform and pontoon which can be settled at anchor, this catamaran becomes an entertainment area (scuba diving for example).

The jury has rewarded the conviviality of the catamaran.

Third prize: the One water home 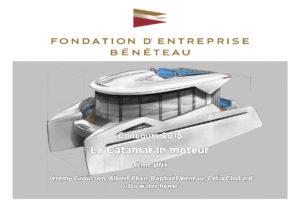 The One water home includes a full environmental conception  with durable, recyclable, modular, and removable aspects.

This innovation allows many different arrangements while preserving energy and creating pleasant space to live.

The jury has appreciated this global and innovative way of design.

The Surfboat is dedicated to the extreme sport amateur. It has been designed in order to fit with surfers and with spot areas. The jury was very interested in this specialization in accordance with the new tendancies of sailing.

This competition has dealt with a project of sail catamaran (size 30/40 feet) which has to combine design, life comfort and technological advances. The jury has rewarded three projects :

Victor Donnard from the architecture school of Nantes has received the first prize for an amount of €6,000.

He has conceived the cheapest, the lightest and the most ecological catamaran as possible. Moreover, he has tried to create a link between competition and entertainment ways of sailing.

The Foundation has decided to give a first price ex-aequo to a project defined by Camille Richard, Cyprien de Hautecloque and Pierre Betbeder.

They have designed a boat self-sufficient in energy thanks to photovoltaic sails and electric engine. This second project is totally different but complementary. The project was thought in order to favour the light inside and to optimize the place by a smart asymmetry (the boat is closed on one side).

This project made by Andreas Kamaris, Pascal Amar, Adriano Ruta and Pauline Fossiez has received the second price for an amount of €4,000.

In a first step, they have managed a marketing study which has led to an elegant, fullness catamaran where the owners live as well inside and outside.