The projects we support

Home › The projects we support

Since 2005, 23 projects have been supported by the Foundation.

The Beneteau Foundation has financed the association Hermione – La Fayette in order that young sailors may discover the deep-sea navigation upon a mythical boat.

For them, it is more than a maritime experience; it is almost a human adventure where commitment, common way of life, exchange and share are true values. The Beneteau foundation has the same DNA. The link between the Beneteau Foundation and the association Hermione – La Fayette has been reinforced thanks to Clement Chabin, Group Beneteau employee, who has experienced the voluntary sailing on L’Hermione. 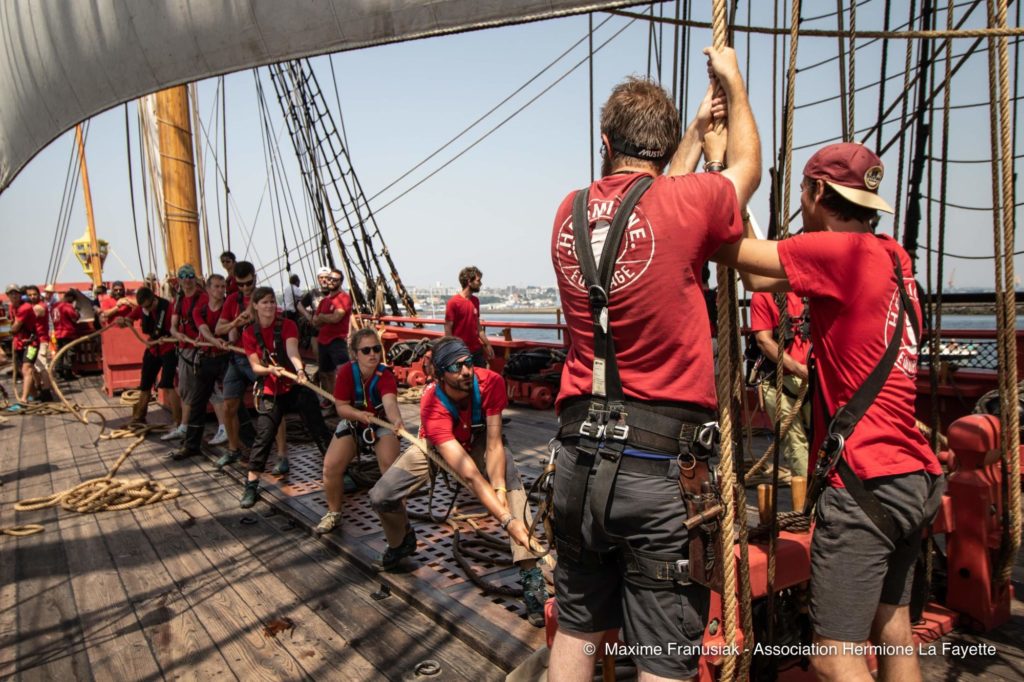 « I am working as a composite technician since April 2019 inside the Beneteau Group boat division. In 2016, during the maritime feast at Brest, I have discovered the boat L’Hermione and since I dream living this adventure. Following a meeting with the boat commandant – Yann Cariou – and a strong training, I realized my dream in 2019. I embarked at Brest for a two weeks experience during a big travel of L’Hermione : « Normandie Liberté ». I navigated from Brest to Rochefort where the boat settle.

The experience is tremendous. Among 60 volunteers like me and 20 maritime professionals, I fully accomplished the association Hermione – La Fayette values. I worked for the technical challenges: boat proceedings, rigging adjustments while admiring the French islands landscapes: Les Glénan, Groix, Belle-Île-en-Mer, Ré… Now I am a member of the association and one week-end a month I participate to the maintenance works of L’Hermione.

Like my colleagues, I am interested in the ambitious project of the association Hermione – La Fayette that is studying a world tour on the steps of the great French exploratory: Jean-François de La Pérouse desapeared in 1788 into the Pacific Ocean. All my sailor companions and me, we thank the Foundation for its financial grants and its support of the association Hermione – La Fayette. We are glad to count among our contributors Beneteau: a so relevant name into the maritime world».

Transmission at the heart of the project

“We have developed a partnership with the priority education network Les jeunes d’abord, which means young people first. We welcome high school students aged 11 to 15 from priority education areas for sailing and environment trips at very low prices : €40 per day all-inclusive (accommodation, food and sailing activities). We used to offer 2,000 days a year, and in 2018 we were up to over 3,500 days, while we aim to gradually work our way up to 5,000 days.
We want to educate current and future generations to protect the environment by focusing on the transmission of heritage and knowledge, from material to immaterial aspects, such as the concept of community living, building, learning and taking constraints on board” explains Tom Daune, Executive Director. 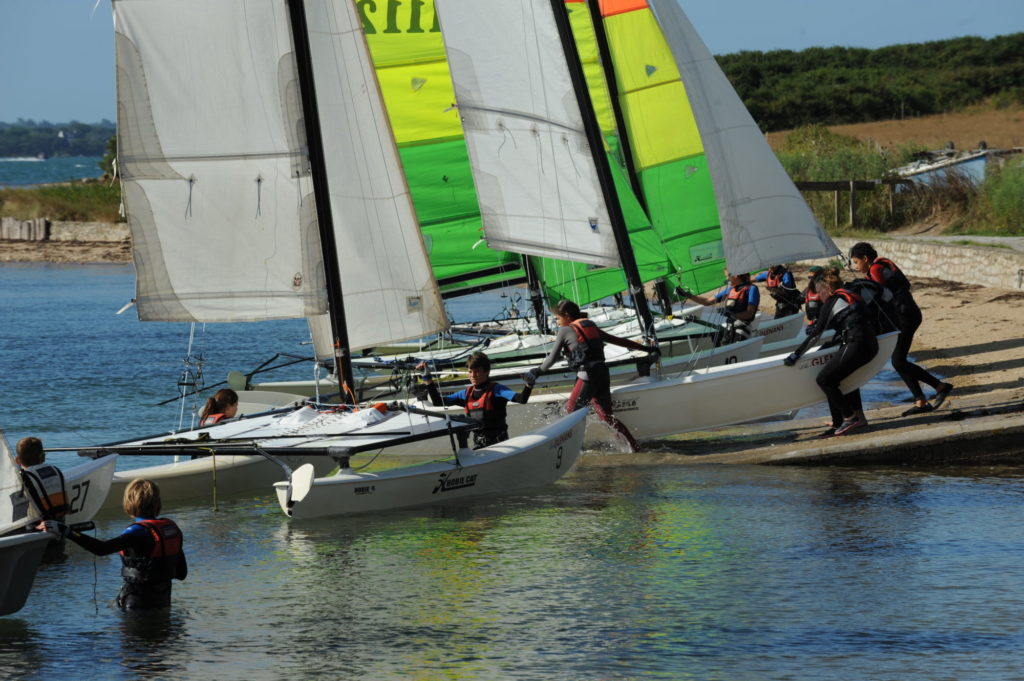 Cigogne Fort is a unique project: this is a historic monument, an element that we need to restore so that it can support our
community project in the future. After being restored, it will become a place for transmission, learning, welcoming communities who are far away from the sea, with a focus once again on transmission, education, training…

Launched based on findings that the Vendée region did not offer any training programs for competition sailors and did not have any structures with the equipment needed for training, the Team Vendée association wants to offer opportunities for young French talents to get trained up on the various professions involved with offshore racing.

More than just a training center, this association teaches young sailors to manage all aspects of race projects: contact with partners, logistics, communications, technical aspects, rules or boat preparations are just some of the skills needed to become a professional sailor.

It offers training in particular for preparation team members, whereas no specific training was previously available for this profession.

By supporting the Team Vendée association for €50,000, the Foundation is actively engaged in promoting offshore racing professions. 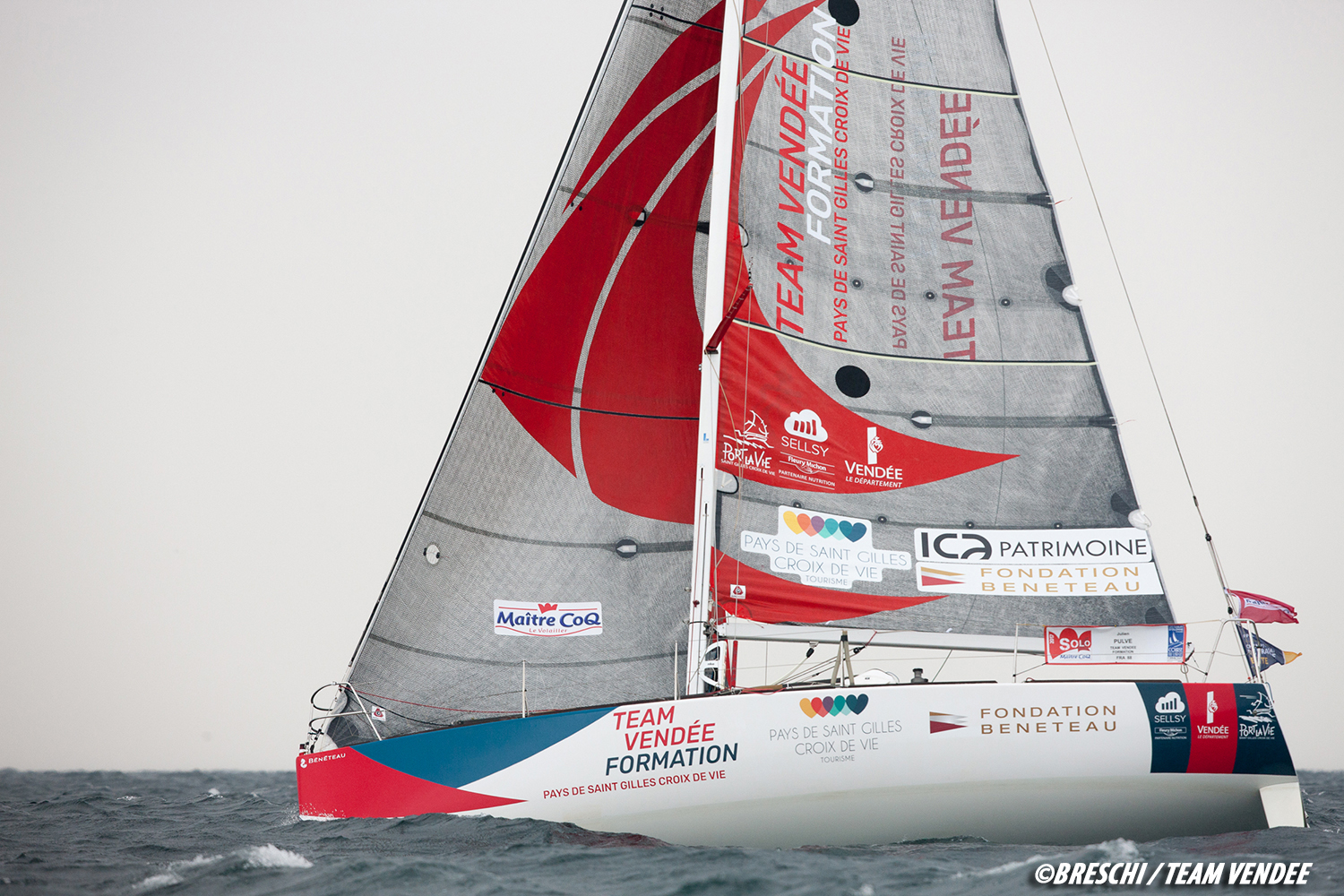 The support of the Foundation is essential for Team Vendée formation in order to become a major player in the training of young people engaged in the offshore race.

Strong times are looming on the horizon 2018-2019: The Figaro race with the launch of the New Boat (Figaro 3) and projects accompanying a new race: «Sardhina Cup 2019».

The foundation paid a participation of €20,000 for the renovation of a fourth boat on the Island of Madagascar.

The association Marins sans Frontières already owns three boats called AIDA, TOSCA and NORMA. These boats roam the Malagasy coasts in order to fight the isolation of coastal populations. They have saved more than 150 human lives.

Inaugurated on 11 May 2018 in the presence of the President of the Republic of Madagascar and numerous personalities, the new boat called DIVA will be assigned to Nosy Borahade, an island located in the middle of the Indian Ocean where the sea is often rough. The Bénéteau Enterprise Foundation will follow the humanitarian and pedagogical actions of the DIVA for the Malagasy people, especially the respect of their marine environment so dear to the Foundation. 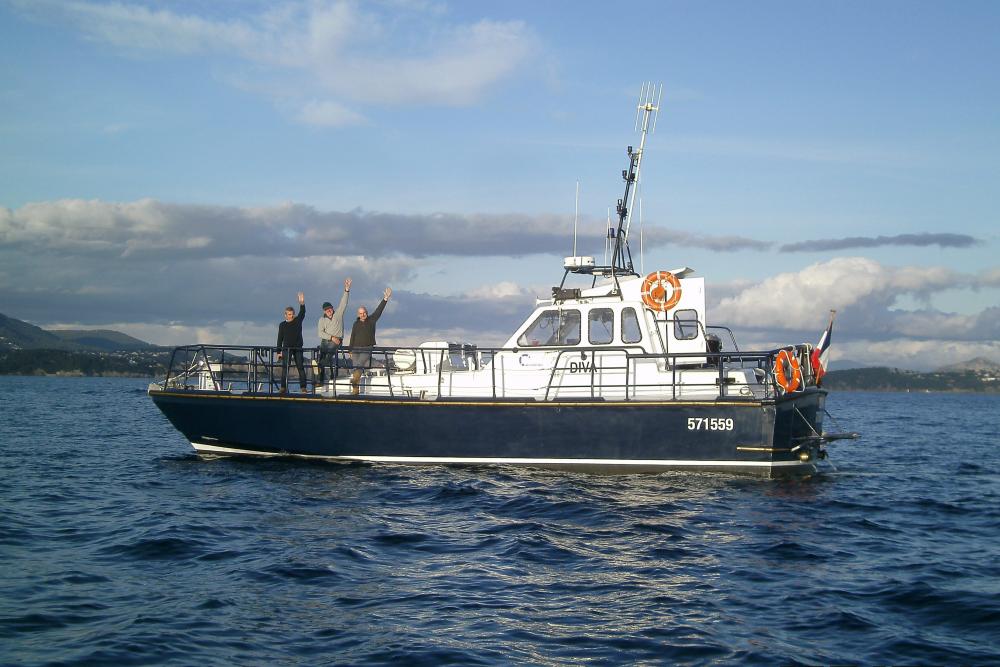 After entrusting the renovation of the hybrid yacht “Lady Valentine” to Beneteau’s training center, the Foundation decided to devote this boat to training with a view to encouraging and promoting professions relating to the sea.

It renovated the yacht so that it could sail again and offer opportunities for Groupe Beneteau employees to be introduced to sailing. The “sailing culture” training course was also created: over one day, it notably makes it possible to get to know the boat (four hours of training in dock) and put trainees in critical or risky situations (three hours at sea).

In 2016, 266 staff from SPBI (Groupe Beneteau boatbuilding company) were able to benefit from this training.

In 2017, 195 trainees benefited from the training, bringing up to 601 their number since the programme was established.

The operation cost supported by the Foundation reaches €8,000 in 2017.

In 2017, supported by the Foundation, Lady Valentine and her crew linked up with the charity Grand Largue, sponsored by Jacqueline Tabarly and supporting young people under administrative or judicial protection measures. Thanks to this initiative, three 15-year-olds were able to complete a crossing from Les Sables d’Olonne to Ile d’Yeu to introduce them to sailing and respect for the marine environment.

RENOVATION OF THE F40 JEANNEAU-FLEURY MICHON

The Foundation is attentive to the preservation of the boats that marked the history of yachting.

Through its action, it seeks to bring back life to these ships which link past to future. This is the case of this catamaran which was built in the shipyards of Jeanneau Technique Avancé (JTA) in 1985. It competed in superb regattas barred by the greatest navigators. For the Foundation, contributing to the renovation of the F40 is a way of saving the memory of the beautiful SAGA Fleury Michon – Jeanneau Technique Avancé, forerunner of the competitions that bloom today. It’s also preserving the history of a team coming from the cruising race which felt the potential of the cruise catamarans. They created the first LAGOON, a brand that would become the world leader in this growing market. The foundation took part in this renovation in 2017 to the tune of 10 K €.

The renovated boat was inaugurated on March 29, 2018 at the port of Trinidad. The new owner – the ASMIP Association – will allow the  general public to discover the joys of coastal sailing. 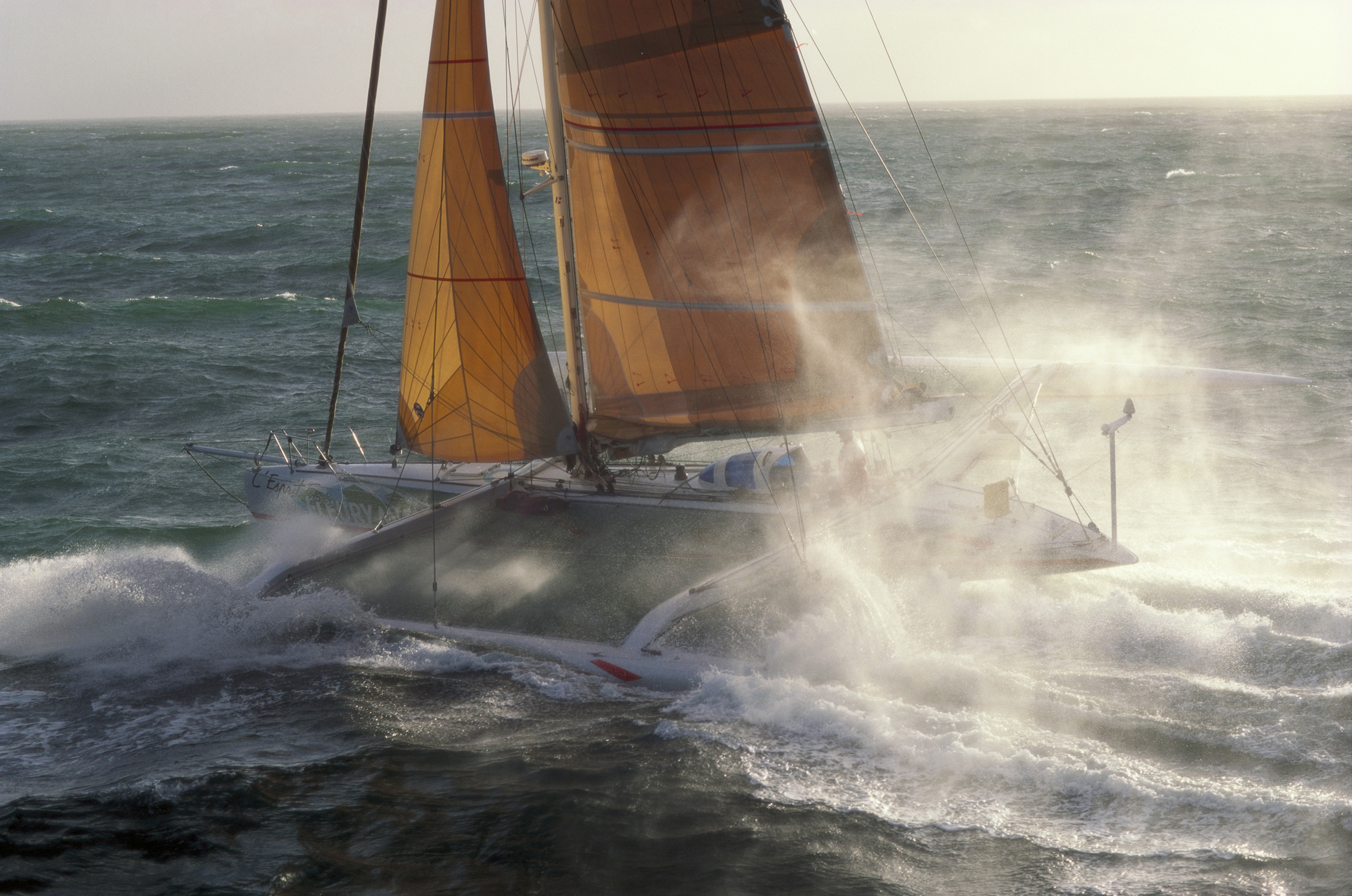 Since 2015, through its strong commitment to safeguarding naval heritage, the Foundation has supported and funded the AACSM Award for safeguarding lifeboats.

Given out for the second time in 2016, this award recognized the renovation of a lifeboat built in 1952 by the Lemaistre de Fécamp boatyard: the “Onésime Fribourg” lifeboat. The Foundation gave a cheque for €10,000 to the president of the Onésime Fribourg association to support this renovation. 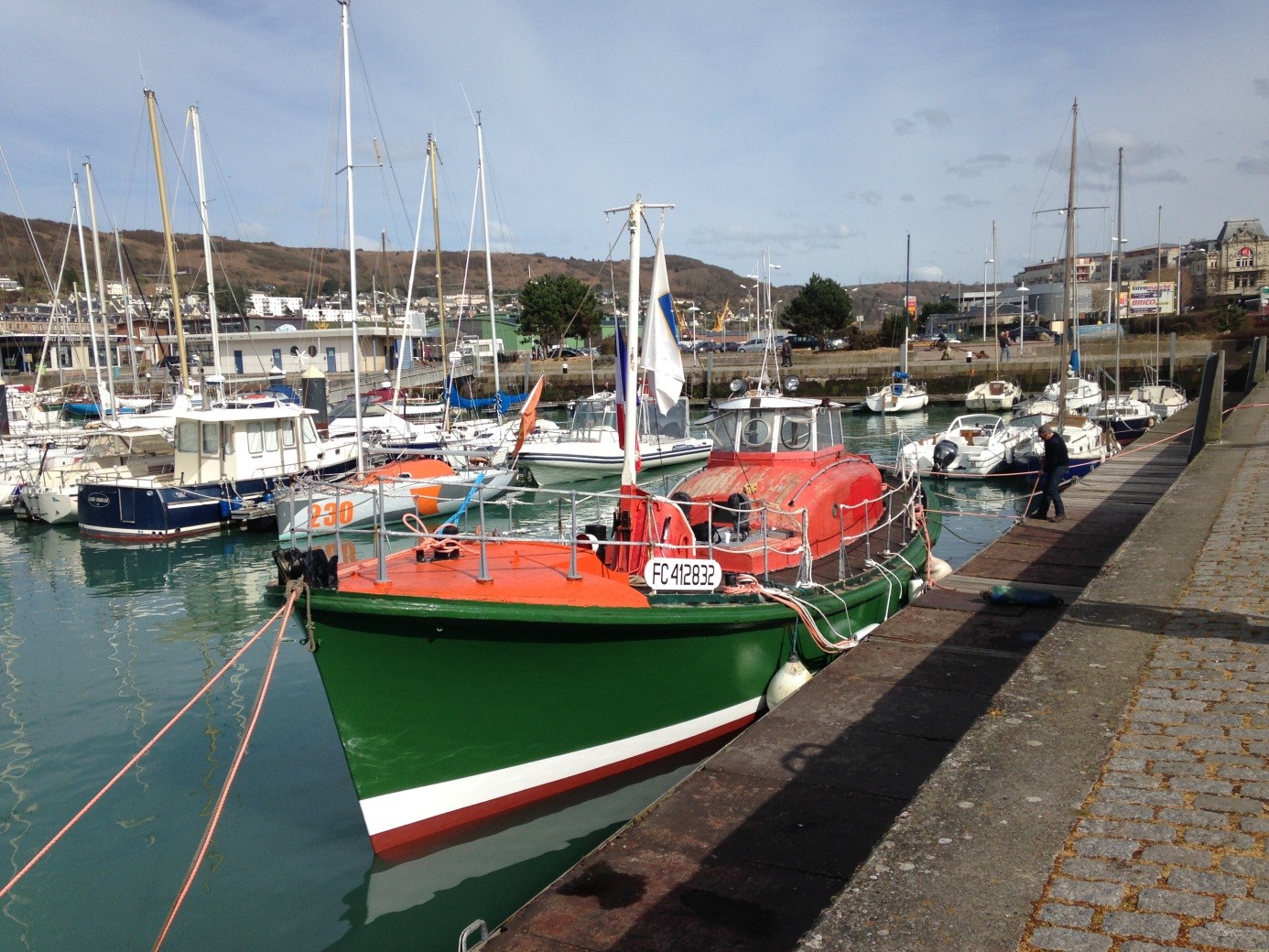 The third edition of the award rewarded the renovation of a lifeboat built in 1930 by the shipyards Jouëts in Sartrouville for the Marquis Maurice Urre. The canoe, thus renovated, will be used to introduce the French naval heritage to the general public. It will participate to regional maritime events and festivals.

The Foundation participated at the AACSM award for the third and final time in 2018, as agreed in 2015. It will pursue its actions of preserving the naval heritage and memory.